There aren’t a lot of unique cars anymore, especially in America, as most customers drive around in similar looking vanilla crossovers. However, the BMW 4 Series Gran Coupe carved out its own little unique niche and, from that, grew a loyal clientele base. Customers of the current 4 Series GC not only love their car but they also can’t wait for the next one, as only a new one is good enough for them to replace their current one. Which is why this new BMW 4 Series Gran Coupe is such an interesting and exciting car for so many BMW customers. 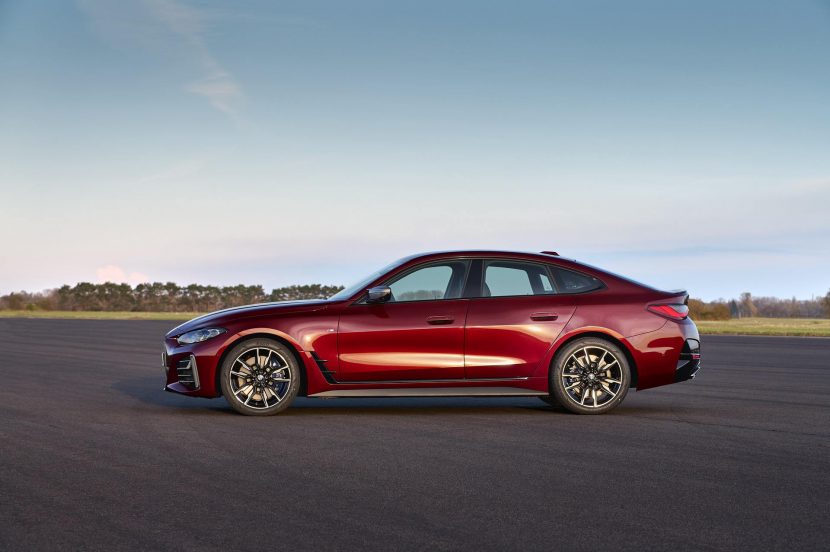 Of course, it still wears its familial 4 Series grille, which may be the most polarizing design cue of any BMW in history. The rest of the car, though, looks really good. Admittedly, it looks just like the i4, just without some of that car’s EV styling bits, making it look a bit sportier. The real exhausts at the back help with that. It’s also nice to see the i4’s flush door handles on the 4 Series Gran Coupe; they look cooler than the standard pull handles on the coupe.

Much like the BMW i4 M50, the new BMW M440i Gran Coupe features some more aggressive bits. For instance, it gets sportier looking wheels, trapezoidal exhausts, and M-style mirrors. That last bit is bound to upset some M3/M4 owners, as snazzy mirrors have typically been exclusive to true M Division products and the M440i is not such a car. That said, it still looks good and those sporty touches do make it look more special than the standard 430i model.

Inside, the M440i Gran Coupe gets a very typical M Performance BMW interior. The BMW i4 has a more unique iDrive screen and digital gauges but the 4 Series Gran Coupe sticks with the current familial BMW formula. In fact, it’s the exact same interior you’ll find in the M440i Coupe or M340i sedan. That’s not a bad thing but it’s not exactly exciting. 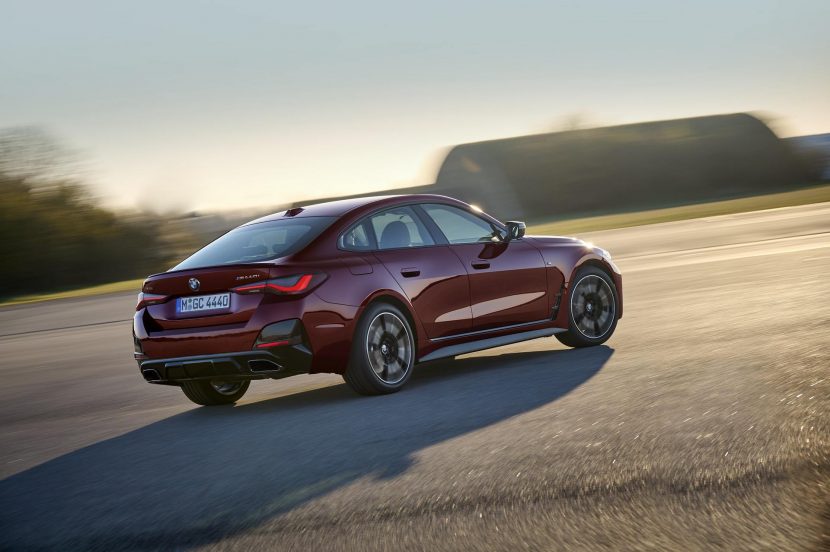 Like with its two-door sibling, the BMW M440i Gran Coupe will get a 3.0 liter turbocharged I6 under hood, making 382 horsepower (374 horsepower in Europe) and 369 lb-ft of torque. Also like the coupe, the M440i Gran Coupe’s engine is a mild hybrid, with a 48-volt starter generator that acts as a small electric motor and can assist the engine with an electric boost of 11 horsepower. That increases both efficiency and power, giving the engine a boost under acceleration and sharpening the engine’s response off the line or at low rpm.

That engine is mated with a familiar eight-speed automatic and, for the M440i, will exclusively send power to an xDrive all-wheel drive system. According to BMW, the M440i Gran Coupe can get from 0-60 mph in 4.7 seconds but it wouldn’t surprise anyone if it were quicker than that in the real world. Top speed is of course limited to 155 mph. An electronically-controlled limited-slip differential is standard on the M440i, as well.

Customers of the entry-level (in the U.S.) BMW 430i Gran Coupe will be happy to know that their car looks just as good as the M440i. To be honest, aside from the side mirrors and exhaust shape, there’s not much visual difference between the two. The BMW 430i Gran Coupe looks every bit as good interesting as its more powerful sibling.

Sure, the M440i gets slightly lowered suspension, more aggressive wheels, a tweaked grille design. But it’s not enough to make 430i owners jealous. 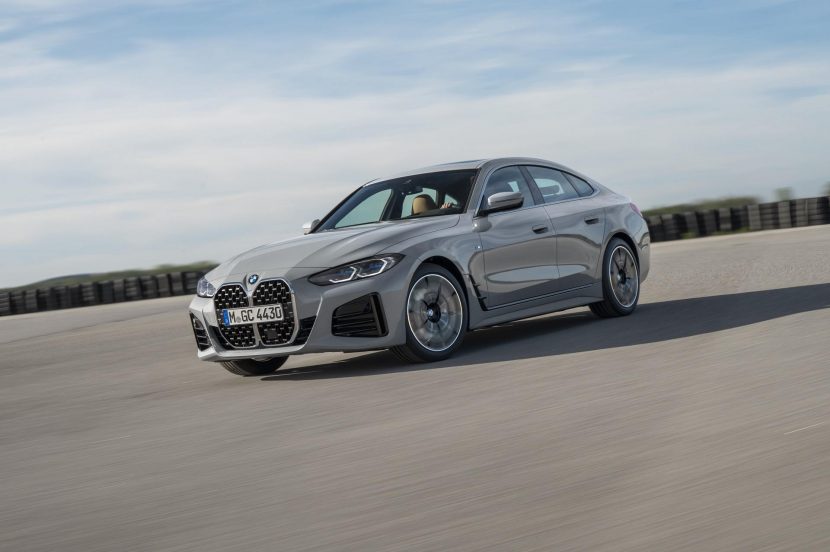 What will make them jealous, though, is the M440i’s engine. While the 2.0 liter turbocharged four-cylinder in the BMW 430i Gran Coupe is a fine engine, making 255 horsepower and 295 lb-ft, it’s not as thrilling or as silky smooth as its six-cylinder sibling. The four-pot also lacks the bigger six-pot’s 48-volt mild hybrid system, so no electric boost for the 430i.

However, the 430i still gets the same eight-speed automatic transmission, except it gets paired with a more enthusiast-friendly rear-wheel drive. There’s no xDrive available for the BMW 430i Gran Coupe at launch. It’s possible the 430i could eventually get xDrive all-wheel drive as an option, we haven’t heard anything about it at this point. Though, it does come with the M440i’s limited-slip rear diff as an option. 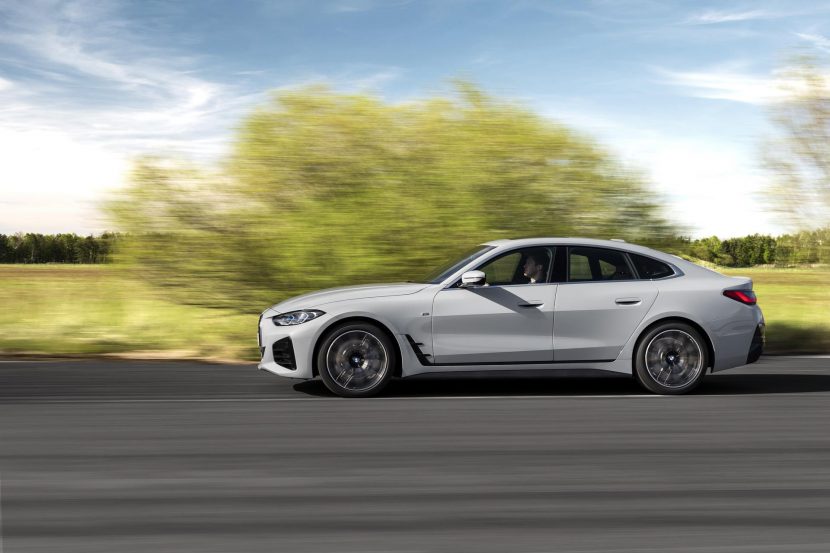 Putting the “Gran” in “Grand”

As-standard, the 4 Series Gran Coupe is going to be a pretty luxurious car. All 4 Series GC models will get acoustic glass on the windshield as-standard, as well as three-zone climate control. Auto-dimming mirrors all around are also standard. Optional pre-heating of the car is also available through the My BMW app, so you can get your car nice and toasty before your even get in. The optional glass sunroof is also 102 millimeters longer than the previous model’s, giving passengers more visibility and the cabin more airiness. 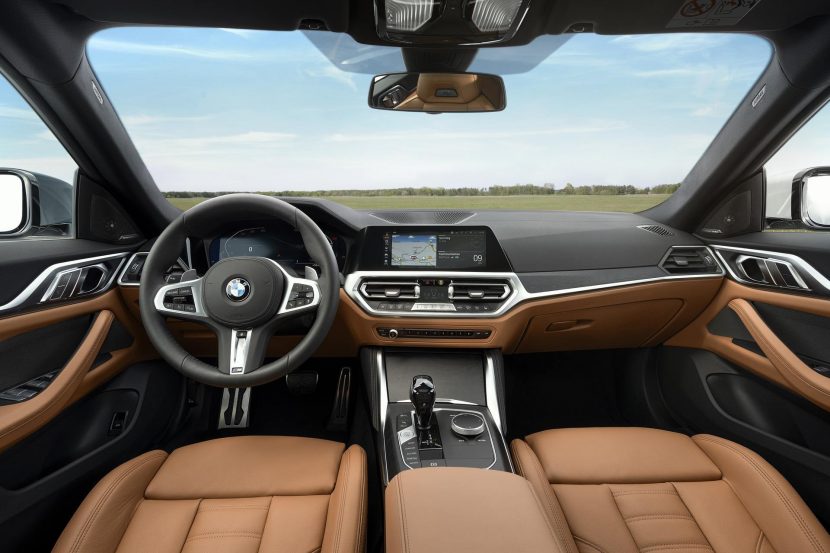 In addition to the luxury niceties, the 4 Series Gran Coupe will get all of BMW’s typical fancy technologies. For instance, it will come available with BMW’s 3D View parking cameras, Parking Assistant, Reverse Assistant, and the Personal Driving Assistant Professional, the latter of which is BMW’s Level 2 autonomous driver aid. Though, the 4 Series Gran Coupe isn’t as high-tech as its i4 sibling, as the former will only get BMW’s iDrive 7, while the later gets the new iDrive 8.

The new BMW 4 Series Gran Coupe combines interesting looks, with a hatchback trunk, and a four-door sedan body style to create a unique car that’s both stylish and practical. Customers of the current 4 Series Gran Coupe can’t seem to part with that combination of attributes so they’re likely going to love this new one.